Mistress pees on slave to make him shower

This mistress's slave had not had a shower in days, and she did not like that. She wanted to humiliate him to shower, so she hatched up a plan to make him do that. She made him remove his clothes and then started peeing on him. He never to have this golden shower but now he would be forced to go and have a shower or she would piss on him again. 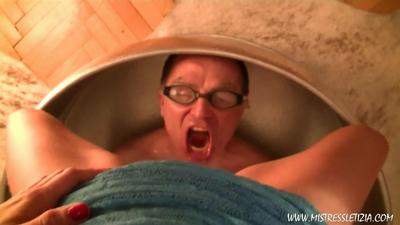